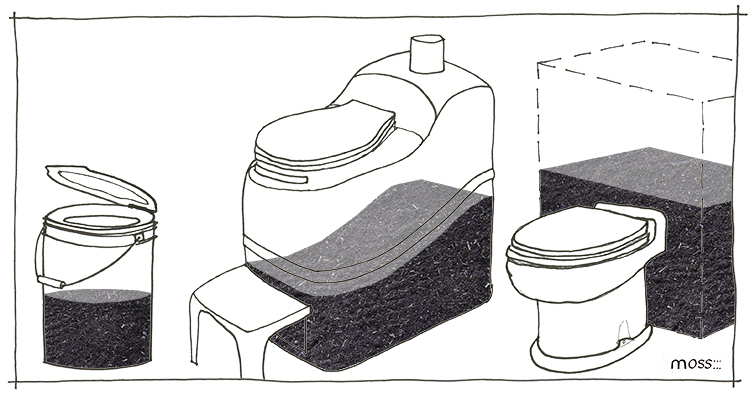 In recent posts we’ve talked about the possibility of water conservation in the bathroom with low flow faucets that rely on aerators to diffuse and moderate water flow and mentioned low flow toilets that can flush waste away with a quarter the water of an older model fixture.  Those are both easy steps that can and should be included in any update to your home’s bathrooms.

So, continuing in the theme of water issues we’ve been covering recently (Four Principles of a Clean, Green Bathroom Update, Why You Should Care About Saving Water At Home, Low Flow Fixtures 101: or How to Save 11,000 Gallons of Water in 5 Minutes, and The Dyeing of the Green – St. Patrick’s Day Reminds Us About the State of the Chicago River), today we are offering some information on a slightly more dramatic step.

What about a composting toilet?

Before you gasp, shudder and click away … give us a minute to explain why.

But we don’t like to talk about it.  Mention the subject to even the most straight laced group of eco-warriers and the room is likely to erupt into giggles.  Any conversation about alternatives to modern plumbing will be studded with euphemisms and snorts of laughter.  Scatalogical (aka poop related) humor is popular with more than just the junior high set and its hard to address seriously.  Here are examples of the “issue” being faced directly (as in the children’s book Everybody Poops), snarkily  (South Park’ Mr. Hankey, the Christmas poo) or in delicate metaphors (Charmin’s Bears-concerned-about-“lint”).

Don’t get us wrong: Flush Toilets are Historically Important and Convenient

Flush and water-based toilets were invented (and re-invented) for an important reason – as people gathered in larger and larger cities, the unsanitary nature of their literally piling up human waste threatened communities with ill health, disease and good old fashioned stinks that no one could want.   No one would argue that modern sanitation systems haven’t been vital to the health and wellbeing of everyone who has access to them and that their lack is still a terrible burden in many parts of the world.

HOWEVER … It’s also true that human ingenuity has been responsible for many technological developments over the the span of history and all we’ve managed to do with the modern toilet is build a better and better mousetrap (improving their ability to flush and self clean, reducing the amount of water they need and making them more and more available and affordable).  They all generally operate on the same principle they always have, that we should mix poop with drinking-glass-clean potable water in order to deal with it.

The Combined Sewer System … is Crazy.

In order to relocate human waste from the bathroom in a house, apartment or office to an appropriate sewage treatment facility we mix it with first treated potable water (the flush) and then with most of the rain water that hits the ground in any given watershed as it travels through the combined sewer system.  Once it arrives it ALL has to be treated as unhealthy and hazardous and cleaned again before it can be so much as released back into the waterways, let alone turned into drinking water again.   When explained this way the idea seems like madness.  We have to be able to come up with a better system than this!

So what about the alternative?

We’re not proposing a return to the backyard outhouse, the cesspool, or the chamber pot here.  While its true that the most basic execution of this concept today is the Luggable Loo – literally a five gallon bucket with a toilet lid, the available options for composting toilets are now much more high tech and low (visual) impact.

Composting toilets get a fairly bad rap as either, primitive  or bizarrely space-agey plastic monstrosities.  But the collage below shows that there are actually a range of possibilities these days.  Sure you can still have a single chamber monstrosity requiring a step stool to access it if you want.  But there are also a number of low and no water composting toilet solutions on the market which look just the same as a conventional model and stake their reputations on being just as smell and hassle free.

How do composting toilets work?

Complex or simple, composting toilets basically all work on the same principle – that liquids evaporate and human waste decomposes and both of these processes happen much more effectively (and odorlessly) when they happen separately.   In order to encourage fast decomposition composting toilet systems control the moisture content of waste products and circulate oxygen through them to foster appropriate bacteria.  They also used negative pressure venting systems to make sure any odor is quickly removed from the space.  They separate solids from liquids and, instead of creating a nasty slurry by adding potable water, they dramatically reduce the volume of waste in the process.

Self contained composting toilet systems process everything within one unit (usually resulting in that space age white plastic box and higher-than-normal seat).  Central composting systems have a more conventional looking toilet seat which connects to a larger composting chamber in another part of the building (either by gravity when the toilet is directly over the storage chamber) or by a small amount of water to move waste to a near by chamber.  Both of these differ from the more DIY system where you accumulate waste in a chamber that is periodically cleared out and transported to another location for composting although that system too, relies on separating liquids and solids as quickly as possible (as well as drying everything out further with scoops of ash or sawdust.

Come on Kid, Everybody’s doing it!**

The Bronx Zoo in New York City replaced a faulty septic system for its half a million visitors per year with a foam flush system of composting toilets provided by Clivus Multrum Composting Toilet Systems in 2007.

**for all the possibilities, there really aren’t that many examples of publicly available composting toilets.

So … are composting toilets for you?

We are far from recommending a composting toilet to the average bear (ahem, American family) but it is an alternative to consider if you are looking for ways to give your construction project an eco-boost.   For city dwellers, this is a fairly emotion/ethics based choice but if you happen to be building in the country, choosing a composting system over building your own septic setup could be a very economical decision.  Either way, though the choice is definitely an individual one.

What are your thoughts?  Share them in the comments!