Last week we showed off one of our favorite pieces of moss-made furniture – the LAX Desk.  Matt began his design career in Southern California, where he learned to love the exuberant Googie style.  This rare building style recognizable and iconic.

Today we learn … What is Googie architecture?

A Googie By Any Other Name …

Also known as “Coffee Shop” style, buildings like these get their name from a now-closed cafe on Sunset Boulevard – Googie’s – designed by architect John Lautner.  He captured the full exuberance of post war design in 1949.  Decked out in neon lights and with a bold sharp-angled roof line – it fit the zeitgeist to a T.

While it was beloved by the Hollywood scene, it was panned by critics who thought it was a betrayal of the orderliness and restraint of other types of modern architecture. 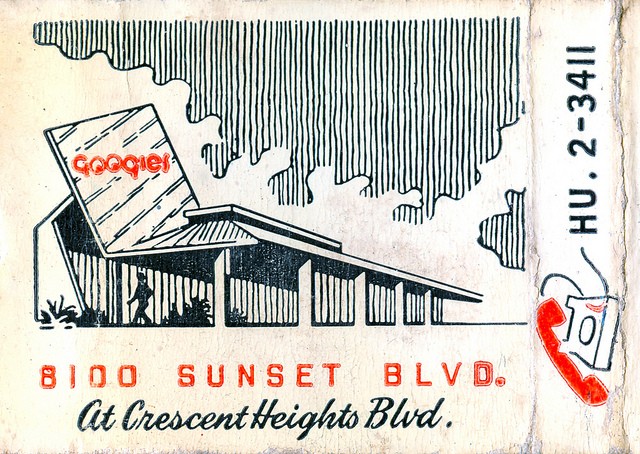 The Style of the Future … is for Everyone

When it was designed, Googie’s and the other futurist buildings it inspired were though of as intensely modern, predicting the bright technological future that was just around the corner for every American.  Now we tend to think of it as quaintly “retro.”  Some Googie buildings are in danger of being torn down or have long since been lost since they are, generally, not private houses of the wealthy or well funded public buildings. That’s one reason they are so great.

Googie advocate and architectural historian, Alan Hess, is quoted in this great Smithsonian feature, pointing out just that fact: “One of the key things about Googie architecture was that it wasn’t custom houses for wealthy people — it was for coffee shops, gas stations, car washes, banks… the average buildings of everyday life that people of that period used and lived in. And it brought that spirit of the modern age to their daily lives.”

That’s not to say Googie style buildings were never iconic public buildings or fancy houses.  You’ve spotted one, if you’ve seen the Space Needle in Seattle, remember the Chemosphere (flying saucer) house from the Charlie’s Angels movie, or ever watched the Jetson’s.

You could even classify a lot of the “modern baroque” designs of Eero Saarinen’s  – like his 1962 TWA terminal at Kennedy Airport as Googie.   Eero built his design reputation on the St. Louis Arch which encompassed a lot of the eager optimism of the age in its uplifted curve.

The Googie building (at the top of the post), which inspired our LAX Desk, is another Airport associated buildings – the Theme building at LA International.  This isn’t a coincidence.  The airports constructed in the 1960’s were inextricably linked with that excitement about the future that the Googies embodied.

In the end, the excitement that drove Googie design faded.  By the 1970’s, Americans were starting to feel more jaded; no one expected to fly to work with a jet pack … they just wanted a very large car.  Architecture shifted away from the joyful curving cantilevers of the Googies and toward more conventional designs, but we still love the Googies.

You’re not likely to encounter a googie building around any random street corner in America, but now you are ready to recognize one if it pops out at you.  If you’d like to read a little more about the style, check out our post on the LAX Desk here!