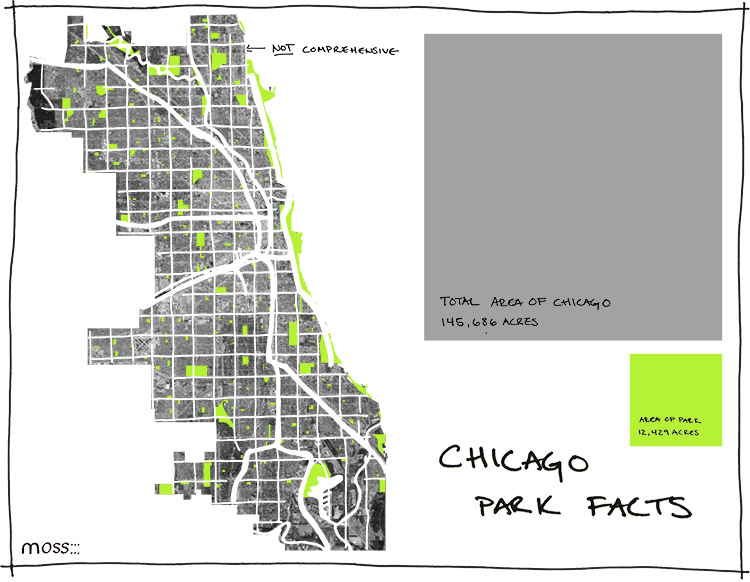 Did you know that Chicago has the oldest and largest park district in America?  With 8,100 acres of park land managed by the city and 12,429 acres (including land managed by the state and county), 8.5% of the land area of Chicago is park space open to the public.  It’s something to be proud of and celebrate – and certainly many of our citizens will be appreciating the parks during the upcoming labor day weekend.  We thought we’d take a moment to celebrate the park system that we have … and wonder how we can improve it.

What kind of green space are we talking here?

Everyone is familiar with Chicago’s big name parks: Grant park, Millennium Park, and Lincoln Park (the nation’s second most popular after New York’s Central Park) but the city has a wide range of public open spaces ranging from unassuming neighborhood parks – little rectangles of grass with a swing set and benches – to great urban retreats.  There are gracious and glorious parks located all over the city that the average tourist, or the home-body neighborhood dweller, may never have seen.  For example:

Ping Tom Memorial Park nestled in South Loop along the river with views of the dramatic and futuristic orange line fly-over and the skyline.

The Garfield Park Conservatory is a gem of Chicago that can be counted as “hidden” or a no-brainer favorite, depending on whether you are in the know.

One of my own favorites is the Merryman Playlot Park slotted between houses on quiet Marshfield Ave, just a few blocks from moss HQ, for its futuristic hemispherical net climbing structure.  It’s tiny but effective: I’ve rarely seen it unoccupied by happy children.

There are also a few real clunkers.  For example, Forgotten Chicago has featured a terrible idea Expressway parks.  They’re just what they sound: circa 1970 of turning odd-shaped snippets of undeveloped land adjacent to the freeway and installed a few play spaces and some grass.  As Forgotten Chicago wonders setting up parks “next to loud, polluted expressway right-of-ways” just doesn’t seem like a good idea.

How Does Chicago Stack up Against Other Cities?

According to Per Square Mile … we could be doing better.  Even in this list we trail New York (the second city INDEED) but we are on the list at least.  I, for one, would be fascinated to see how we stack up against urban park ratios internationally but no one has helpfully crunched those numbers for us yet.

How is it distributed?

Not that well.  A Chicago Tribune opinion piece on parks from 2011 compared the city to a house with a great front yard (the lakefront) but a “backyard is marred by crowded stretches bereft of open space that don’t get the attention they need.”  While some neighborhoods have an abundance of green space (can you every have too much), others are pretty thoroughly hard-scaped.  That Tribune highlights three particularly park poor areas: “northwest along the Chicago River, southwest along the Stevenson, and south from the junction of the Chicago Skyway and Interstate 94 through the Far South Side.”

Still, we could be worse.  Nine out of ten Chicagoans live within a half mile of a city park.  (That ranks us 6th after San Francisco, Boston, New York, Washinton and Philadelphia)  Having an even distribution of parkland is important, according to the Trust for Public Land who did the study.  Simple common sense would tell us the same.  The 2012 City Park Facts report breaks down data  into total acres of parkland, acres per resident and by city area.  It covers spending and parks employees and park visitors.

What more can we do?

The upside, pointed out by the same tribune article, is that we can improve the city by ADDING new greenspace.

The Bloomingdale trail project is moving forward in its plan to transform a defunct rail line cutting east to west across the city through several neighborhoods into a new elevated park which will rival New York high line (certainly in length) and other similar projects are always possible to turn un-used or under-appreciated areas into features of the city or bright spots in a neighborhood.

What’s your favorite park in Chicago? Let Us Know in the Comments!