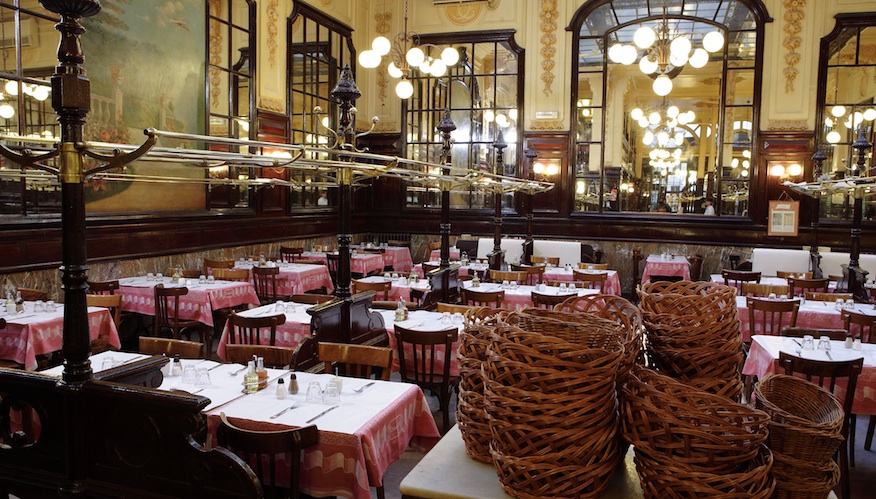 It doesn’t take a background in linguistics to figure out that Café = Coffee Shop, but what about those other dining concepts of French origin? How does a French bistro vs. a Francois brasserie stack up? Join us for a quick tour as we dive into the lexicon of dining and discover what makes these French-origin restaurant types distinctive in design.

BRASSERIE / “BREWERY”: Brasseries are the antecedent to gastropubs in that they serve beer (sometimes house made) and food—but not just “bar food”; you won’t find greasy tater tots and sad flimsy burgers here. Food that is thoughtful, hearty and satisfying finds their home at both the brasseries of olde and the gastropubs of new. What distinguishes brasseries from a bistro is that they usually provide more generous service hours, bleeding into the late evening, or turning over tables at off-hours in the afternoon. And back in the day they were the spot for a nice local brew, but now they, like 99% of French eateries, serve a roster of wines. Brasseries are Alsatian historically, meaning hailing from Alsace-Lorraine, a long squabbled over portion of France that has changed hands between Germany and France many times. Brasseries, also known as Alsatian Beer Halls, served as a warm refuge from the constant war and so became a place of the people, serving fancy food yes, but also Choucroute (sausages and sauerkraut) or some (moderately priced) special of the day.

DESIGN DETAILS
Some say the brasserie has endured because of nostalgia: it emerged during La Belle Epoque in France which is widely considered to be one of its most glamorous and romantic periods. Art Nouveau emerged at its heels, a distinctive style that prized organic objects as inspiration and was all about curves, flourishes and serif fonts (!). Some of the design of this time, from chairs to metro station gates, to balconies and window frames recalls vines creeping up a wall or bursts of flowers set across muted complementary colorscapes with a sienna tinge to them, as if they too knew the “good old days” (La Belle Epoque’s translation) were soon to be a thing of the past. Bofinger, allegedly Paris’ oldest Brasserie is an Art Nouveau time capsule. The chandeliers are silver serpants. The molding is ornate. And there is a grand stained glass installation in the center. Many brasseries, even if they haven’t been around for over 150 years, keep these details, or offer a fresh update, to provide the fulfilling design experience of their predecessors.

BISTRO / “FAST” IN RUSSIAN / FROM THE FRENCH WORD ‘BISTREAU’, “INNKEEPER”
A French bistro has its associations with family: family owned and family hours. That means lunch from 11-3pm and a break in between to tend to the kiddos and refresh the shop. Dinner from 7-12am. The menu might not change its offerings for lunch or dinner, serving the same menu all day. A small selection of wine and beer were usually on rotation, too. The French Bistro traditionally served simpler food (traditionally—the Nouveau bistro movement was helmed by chefs wishing to provide an intimate and unpretentious atmosphere while serving some unique and complex cuisine) at cheaper prices. The bistro atmosphere may encourage guests to stay and chat after their meal, a sort of cafe/restaurant hybrid, rather than feel as though they must leave once the check has arrived. There are rumors that bistros were named after the Russian word “bistro”, which means quick, during the Russian occupation of France. Russians were looking to get a quick bite so the name ‘bistro’ worked as an all-on-one eatery title. But not everyone agrees on this.

DESIGN DETAILS
Zinc countertops were so popular in the French bistro that people called bistros “Zinc” for short. Although some bistros are more zinc-like then others (think of when you would use the term greasy spoon diner vs. lunch spot), the bar is the heart of the whole operation, and in very traditional terms, it should be made of galvanized steel. These neighborhood mom and pop shops were mostly the watering hole of locals, i.e. not necessarily a place one would traverse neighborhoods to pop into (unless you happen to be Cafe Des Deux Moulins, where Amélie was filmed). A classic French Bistro was also characterized by black and white tiled floors, poster-peppered walls and charming rattan chairs with a relaxed back. While Chicago’s Bistro Campagne certainly doesn’t feel casual, it does feel incredibly inviting with its low lighting, magical outdoor patio—complete with strings of fairy lights—and warm wood detailing. The little roof overhang at the entrance is a nod to the quintessential French Bistro and cafe culture, we’re sure of it.

CAFE / “COFFEE”: Cafe culture as a hotspot of intellectual, political and philosophical thought, swapping of artistic ideas and cabaret of performances has been a global phenomenon for centuries, but has become especially ubiquitous in pop culture as it pertains to Paris. Gertrude Stein might have been drinking an espresso as she penned a great literary work in one of Paris’ many sidewalk cafes. Cafes prioritized coffee, beer, wine and spirits. A snack or simple meal might be available, but food was generally not as thoughtful as in the bistro or brasserie.

DESIGN DETAILS
French Cafes are often swung around corners, which is no surprise because the city of Paris looks like it was laid out by a bunch of angry ants; streets zooming this way and that radiating out from the heart of the city. Whether they are on the sidewalk or at right angles, most have a smattering of chairs outside them, because Parisians will sip coffee outdoors rain or shine, depending on awnings to protect them from the elements. One of the cool things about French inspired-cafes is that their design feels so simple and has endured so well. Chairs outside; chairs inside. Tiny little round tables. Big shading awning. Wood detail. From Starbucks to Cafe de Flore, cafes just don’t look that different than they used to in this sect of coffee culture. Of course their counterpart: modern, spare, white, metal, minimalism; more Scandinavian has endured as well. But it’s pretty easy to see which style coffee giant Starbucks was inspired by.