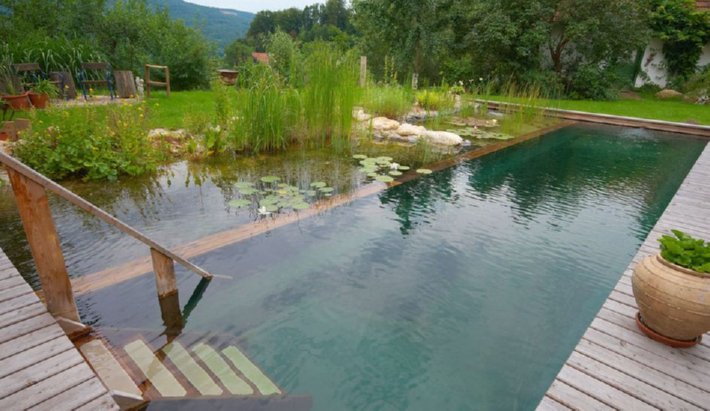 Our first round-up of where the moss team has been on the web this week:

First, blazingly hot weather in Chicago had us dreaming of swimming pools, but without the eye-stinging, hair-slicking addition of Chlorine. Enter natural pools, mini-ecosystems designed for swimming that self-purify via water circulation. Via The Daily Green.

Another pool in the formerly industrial concrete cluster of Le Havre, France. Via Architectural Record.

A Stanford professor and a Dutch scientist both race to create test-tube meat, one from plant protein, the other from a mere sliver of animal tissue, which is then “cultured.” Gross? Genius? Maybe. Timely? definitely.

Laser-cutting is such a stunning way to “print” graphics and text without using inks or dyes. This  laser-cut map of Paris is a gorgeous example of the medium.

We’ve been researching nutrition label info for our concept, going up on the blog next week. We were excited to discover that the UK grocery chain Sainsbury labels its fruit and vegetable packets with the farmer, origin and variety (ignore the funky strawberry in the middle).

That intriguing magazine floating around Chicago is The Chicagoan, an exciting new publication fueled by our city’s creative minds. Little did we know, The Chicagoan is actually a revival: the original launched in the 1920s, just a year after The New Yorker, but due to staff and quality inconsistencies it flitted out of existence until now.